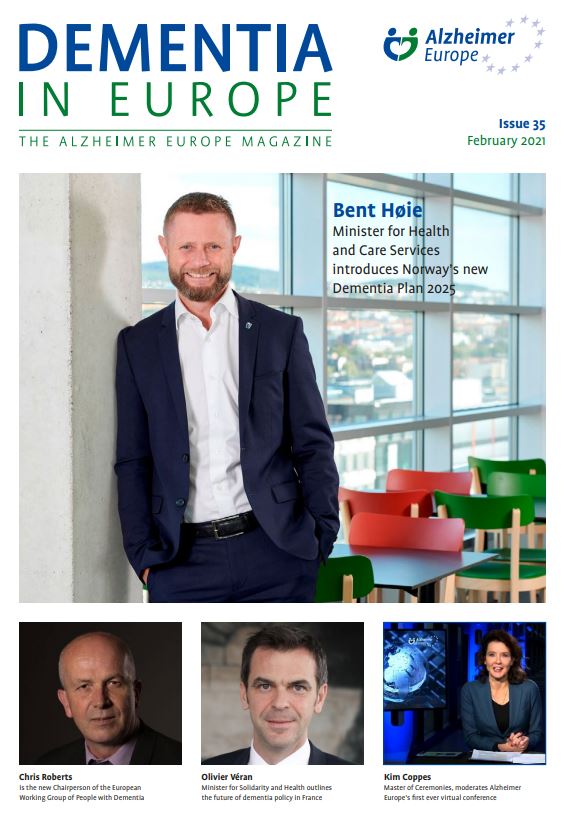 Alzheimer Europe has published a new edition of its “Dementia in Europe” policy magazine, in an electronic format.

The first section of the magazine includes a closing article on the EPAD project in which Alzheimer Europe has been involved. Our co-leads Craig Ritchie and Serge Van der Geyten have been interviewed and reflect on the achievements of the project.

“EPAD aimed first to recruit and deeply phenotype potential clinical trial participants across Europe. This was clearly achieved by the establishment of the Longitudinal Cohort Study and by collecting what is an incredible dataset, open access and publicly available to the research community. This dataset is going to be continually enriched with genomic, proteomic and imaging data among others. There is an incredible excitement about what is going to come out of the high quality and large dataset that we developed through the EPAD Longitudinal Cohort Study. EPAD secured some funds to maintain this dataset and make sure that we could continue to allow free access to it. Secondly, EPAD planned to study new drugs in a well-designed Phase II proof of concept trial. The EPAD platform was developed to speed up the development of effective, safe medicines which slow or prevent the development of Alzheimer’s dementia. It is a pity we never had a drug to be able to start the EPAD proof of concept study. However, pharmaceutical companies have learned a lot from stepping into this collaboration. We still think that a platform trial such as the one we tried to set up is the future if we want to accelerate drug development.”, said Craig and Serge

The @AlzData #NeuroToolKit Data Hackathon has started! 45 teams are uing the NTKApp, @IMI_EPAD datasets, and statistical analysis tools available on the #ADWorkbench to investigate the potential clinical utility of different biomarkers in #Alzheimer’s disease. twitter.com/AlzData/status…