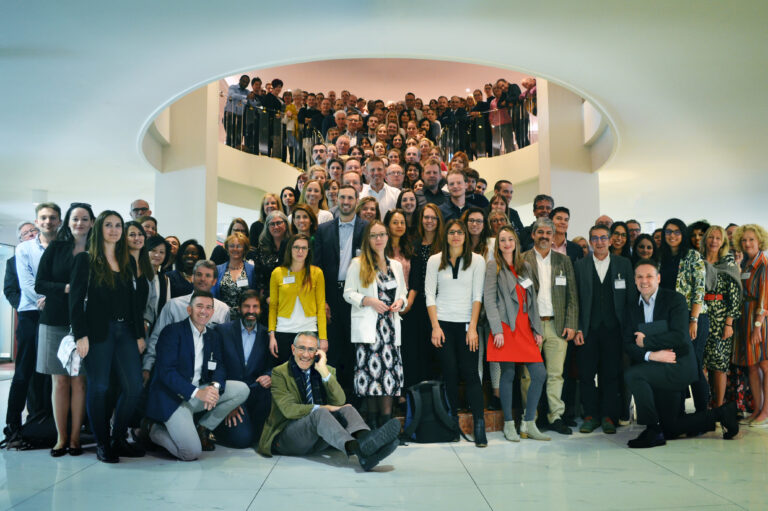 Another EPAD year has passed and we are proud to look back at a lot of successful deliveries and established relationships. We are pleased to present some of our key achievements of the past 12 months.

On 4 February, over 90 representatives of the EPAD project met in Berlin for an investigator meeting. The objective of the meeting was to prepare the new trial delivery centres to put the EPAD Longitudinal Cohort Study (LCS) into action. The day after, EPAD held its PoC (Proof of Concept) Kick Off meeting. For the first time, we gathered 30 sites (active and in set up) working on the project to share experiences, discuss PoC preparations and build core strategies.

On 7 March, EPAD passes the mark of 1.500 research participants for its Longitudinal Cohort Study.

Craig Ritchie and one of the EPAD study participants Eileen Penman featured in national UK news to provide comments on the potential impact of Brexit on EU/UK research collaboration and projects such as EPAD in particular. Both Craig and Eileen highlighted the importance of EU wide collaboration and their concerns on the future standing of Scotland in research outside of the EU.

The EPAD team was delighted and honoured to have been invited at the IMI Projects Communication Event to present EPAD as an example of good practice of communications.

The EPAD General Assembly Meeting took place in Geneva (Switzerland). In attendance were scientists, researchers, representatives from pharmaceutical companies, patient organisations, SMEs, EPAD study site members, other experts and research participants from across many different countries, who make up the EPAD family (also referred to as “Epadistas”!).

For the second time, we exhibited the EPAD study via a large EPAD booth in the exhibition area at AAIC (Los Angeles, US). EPAD also had a business suite at the exhibition area where many engaging meetings with potential interventional owners and other world experts on Alzheimer’s disease prevention took place.

We received the good news from IMI that the EPAD project, originally scheduled to end in December 2019, has been extended for six months until June 2020.

In October, the EPAD project was presented at the 29th Alzheimer Europe conference held in The Hague (Netherlands) as per NEURONET invitation.

We officially announced the external release of the first wave of data as part of the EPAD Longitudinal Cohort Study. The baseline dataset from the first 500 research participants (V500.0) is now available for use by academic researchers and institutions worldwide. The related paper entitled “The European Prevention of Alzheimer’s Dementia (EPAD) Longitudinal Cohort Study: Baseline Data Release V500.0” describing the baseline data from the first 500 research participants (V500.0) has been published online on 26 November in the Journal of Prevention of Alzheimer’s disease.

In addition, the EPAD V1500.0 dataset has internally been released to the EPAD researchers for an embargoed period of 6 months.

We would like to thank you all for a fruitful EPAD year. EPAD combines knowledge and expertise from 39 European organisations from academia and industry. This public-private partnership in Alzheimer’s disease research is a unique collaborative effort that draws on the talents of experts from across the Alzheimer’s disease research and drug development community. EPAD emphasises the importance of collaboration between the different European sites and partners to assure the sustainability of its project.  Looking forward to continuous good collaboration in 2020. Wishing you all an exciting and happy New Year,