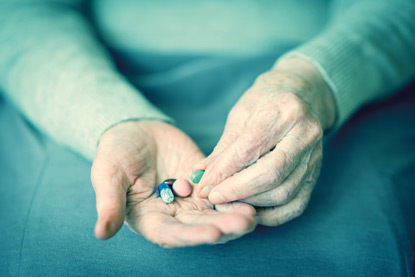 Alzheimer’s disease is a progressive degenerative disease that results in a loss of brain cells. It is the most common form of dementia in the elderly. According to the World Alzheimer Report 2016, there were 46.8 million people worldwide living with dementia in 2015 and this number will reach 131.5 million in 2050.

While there is no cure for Alzheimer’s disease, the U.S. Food and Drug Administration (FDA) has approved two types of medications – cholinesterase inhibitors (Aricept, Exelon, Razadyne) and memantine (Namenda) – to treat the cognitive symptoms of Alzheimer’s disease. However, despite intensive efforts over many years and significant global investment, no new drugs have been approved since 2003.

There is now compelling evidence that Alzheimer’s disease takes hold in the brain decades before dementia symptoms appear, providing a window of opportunity for preventative intervention. As a result, today’s research increasingly focuses on this pre-symptomatic phase, with the aim of delaying or preventing the disease.

The European Prevention of Alzheimer’s Dementia (EPAD) consortium was an interdisciplinary research initiative aiming to improve the understanding of the early stages of Alzheimer’s disease and deliver new preventative treatments.

Research has established beyond doubt that Alzheimer’s dementia is a result of multiple disease processes. By the time symptoms appear, numerous pathologies have hampered brain function.

The hypothesis behind EPAD suggested that early, targeted intervention focused on the very first stages of disease will be more successful. This approach requires greater insight into the life of the brain than has ever been achieved before. Which disease processes are most relevant? What is the interaction between risk factors, disease and intervention? How do you find the right people to track over time? EPAD was set up to find the answers.

EPAD faced a number of challenges, including the difficulty of identifying people who are likely to develop Alzheimer’s dementia, the poor understanding of the earliest stages of the disease, and a lack of flexibility in the way clinical trials are carried out.

To address these issues, we developed three core strategies which deliver benefits for intervention owners and research participants.

Watch the EPAD video for an overview of our approach.

The case for using adaptive trials as a methodology to research dementia is strong. With better data and improved decision-making, adaptive trials can increase the probability of success and decrease development time. EPAD is pioneering this approach in Alzheimer’s disease.

In traditional clinical trials, half of the participants receive the drug under investigation, and half receive a placebo. In adaptive clinical trials, several candidate drugs are simultaneously compared to each other and to a placebo, meaning that a greater proportion of patients benefit from a potentially active treatment. Furthermore, researchers can adapt the trial design in response to emerging results, new candidate drugs can be added, and those that prove ineffective can be dropped.

By setting up a trial-ready cohort of research participants, creating a pan-European network of trial sites, identifying ineffective medicines earlier in the development process and eliminating failures in more advanced (Phase III) trials, EPAD aimed to accelerate the development of effective therapies.