EPAD has been featured in the inaugural ADDI newsletter 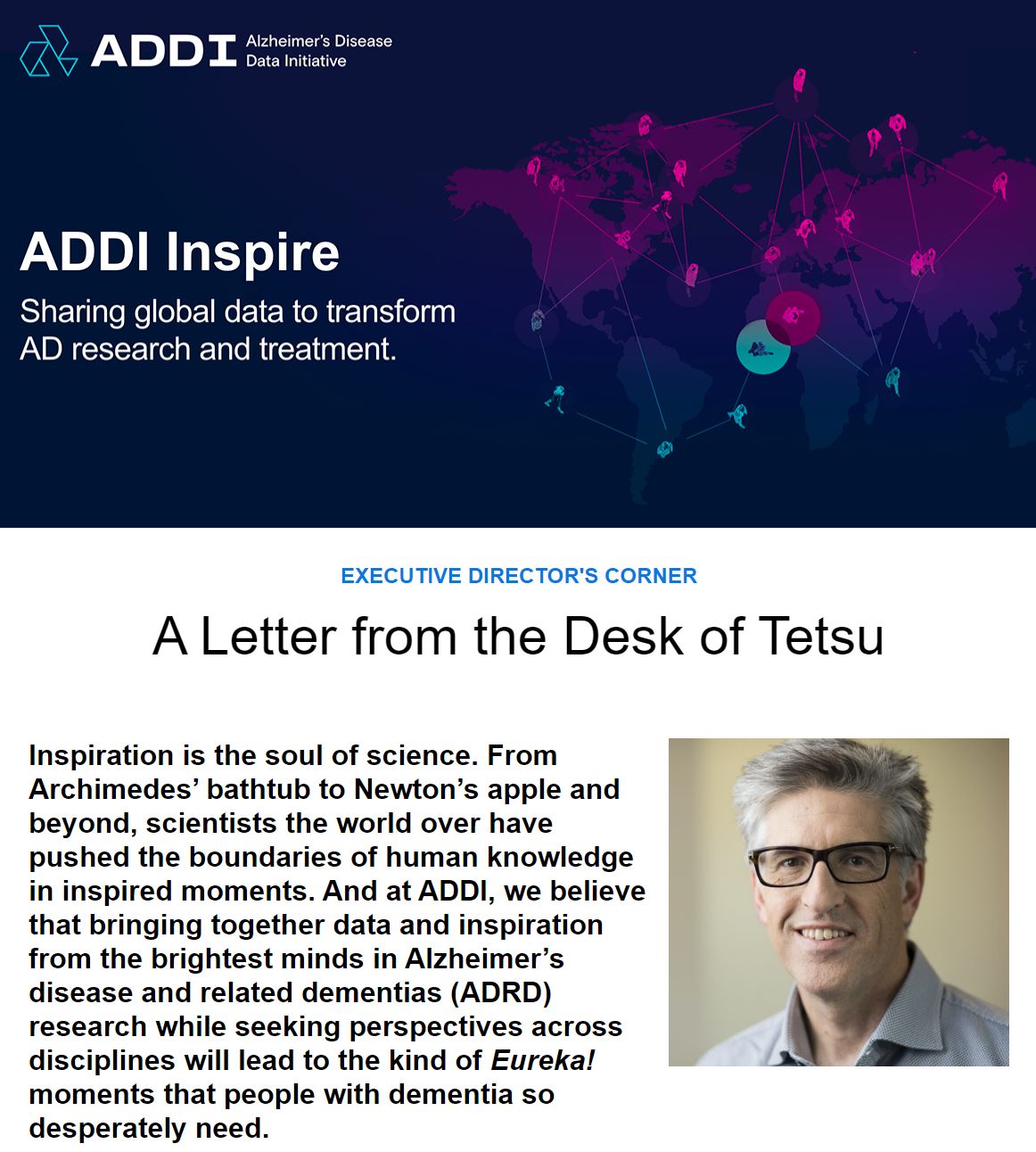 From January 2015 until February 2020, the EPAD Longitudinal Cohort Study (LCS) screened over 2,000 participants across nine European countries to collect a wide range of cognitive, clinical, neuroimaging and biomarker data. A total of 2,096 participants were screened. From these 2,096 participants, EPAD followed up with 1,225 after one year, 421 after two years and 121 after three years. As the project progressed, four datasets have freely been made available ensuring the use of the data for the Alzheimer’s disease research community worldwide.

“As a participant in the EPAD LCS it is very satisfying to know that my data is being made widely available to researchers. To know that this quality assured data will be used internationally reassures me that my involvement in this project will assist in the unravelling of the mystery that is Alzheimer’s disease,” said Malcolm Smith, Chair of the EPAD Scotland participants panel.

The latest and final EPAD dataset called Version.IMI. (V.IMI) is now available in the AD Workbench and will provide even greater value to the global neuroscience research community. All the data collected and processed during the IMI period of EPAD have been included in this V.IMI release.

“Prospective collection of information and samples in EPAD has been a major scientific effort to expand the frontiers of our knowledge on the natural history of Alzheimer’s in its predementia stages. But now in the AD Workbench, this dataset will be findable, accessible, interoperable and reusable (according to the FAIR principles) to other bona fide researchers for it to exert its full, intended impact to fight Alzheimer’s disease,” said Juan Domingo Gispert, principal investigator of the EPAD study in Barcelona and head of the Neuroimaging group of the Barcelonaβeta Brain Research Center (BBRC).

EPAD members are pleased that this incredibly rich data source, including data that have been collected annually from research participants throughout their participation in the LCS, has been incorporated into the AD Workbench. It is an important step in continuing to share the LCS data in the long-term and ensuring that this valuable resource is used by the research community to generate as much knowledge as possible. The ADDI platform will provide a crucial acceleration in scientific breakthroughs on the causes, diagnosis, and prevention of Alzheimer’s disease.

“At the heart of the EPAD Programme was an explicit commitment, responsibility and obligation to ensure that the time and effort of research participants and researchers yielded the highest quality outputs of knowledge. The global visibility and ease of access and research which ADDI provides helps us to achieve our objective. Moreover, having been involved for the last few years in the design of the AD Workbench it stands to reason that this platform is absolutely perfect for our needs and we are honoured and delighted to be the first project to place our entire dataset onto the work bench. We expect that in the years ahead, new data being collected from EPAD and other programmes from across Europe and the World will utilise the ADDI workbench making ‘interoperability’ a real success,” said Craig Ritchie, Project Coordinator of the EPAD project.

You can read the ADDI newsletter here.

"There is a growing consensus that individual research results that are potentially relevant should be reported to research participants” & “Our work was positively received by the EPAD partners, and formed the basis for the set-up & the conduct of the study,” said Eline Bunnik

Have a look on the @IHIEurope newsletter including a spotlight on IMI results from projects on diabetes @HypoResolve and #Alzheimer’s disease @IMI_EPAD @IMI_AMYPAD ⬇️ Read it: bit.ly/3jeaxdM twitter.com/IHIEurope/stat…

17 centres have contributed to the @IMI_AMYPAD Prognostic Study across 11 Parent Cohorts including @IMI_EPAD. Have a look on the latest AMYPAD paper published in @FrontNeurol ⬇️ twitter.com/IMI_AMYPAD/sta…

All data sets from the @IMI_EPAD Longitudinal Cohort Study are available in the @AlzData #ADWorkbench and we're pleased to see that more and more people are using the platform to share & discover #data to accelerate discoveries and innovations in the #Alzheimer's disease field⤵️ twitter.com/AlzData/status…