EPAD opens first site in England in Buckinghamshire and Oxfordshire 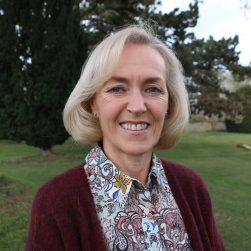 We are very pleased to announce that the EPAD LCS study is now recruiting volunteers in England. People in Buckinghamshire and Oxfordshire over the age of 50 are being invited by the NHS to join the EPAD project. The University of Oxford is the first site to open in England and Wales and second in the UK.

The first recruit in the two counties is Mary-Jane Hicks (pictured), 57, a personal assistant from Abingdon, Oxfordshire. Her father, Phillip Hicks, was diagnosed with dementia in 2012 aged 87 and died from the condition in September 2017 aged 92. She lived with and cared for him during most of this time at his home in Abingdon.

Ms Hicks found out about EPAD through Join Dementia Research, a website where the public – with and without dementia – can register to be told of dementia studies they can take part in.

She said: “I’m worried that I might get dementia one day and I saw first-hand how awful it is, so I thought ‘if there’s anything to do to keep it at bay, like if the researchers identify something that might progress into it, then I’d be keen to be part of clinical trials’.”

“I would encourage people to take part in research. If we expect science to mend us, then for that to happen, we have to participate. That’s always been my view.

“I hope we can identify how to halt dementia before it kicks in. If people are going to live to be old, I hope they keep the quality of life that goes with that.

“I do all I can to live a healthy life, and if there’s something I can do to stop me getting dementia, I want to keep it at bay for as long as possible.

“You need participants in order to do research, so that’s why I think taking part is really worthwhile.”